It is day fourth of build season. Everyone is working hard to get their prototype shooters and climbers done. While others are working on setting up the new laptop that will be used for the driver station at competition. The machinists are working on getting the wheel shafts and side plates for the robot done.

The shooter prototypes are almost done. Those who are working on them are trying to attach the wheel to the platform and get it powered up. They are hopeful to get it working flawlessly by tomorrow. The climbing mechanisms are still a work in progress. The climbing prototypes should be done by the end of this week.

The programmers are trying to get their drive straight code working. This will allow us to drive straight across the field with out veering off where we want the robot to go. They are also working on getting the gyroscope to work. The gyroscope will tell us when the robot is not facing the direction we want it to. So with a push of a button the robot will correct the way it is facing.

The time for robot building has arrived. One word is ringing in everyone's ears: prototypes. Several prototypes for the climber, shooter, and disc grabber are in the process of being created while others are working on the cRIO and software.

Three climbing prototypes are being worked on in small groups, and they've all made quite a bit of progress. Team member Sidney Ortega said she's almost done, and the gears are just a little off for her wheel solution. If her prototype is successful, she believes the gear system may be applicable to other things needed for the robot. Way to go, Sidney! The other climbing prototypes are coming along and should be finished by the end of the week.

The shooter and disc grabber prototypes seem to be successful so far. They're still in their early stages, but team members are confident they'll be finished soon.

A small group worked on flashing the cRIO, updating all the software, and writing basic code. The basic drive code is complete, and as for the other tasks,

We should be able to finish it tomorrow in elective.
— Shawn Schwartz

Morale is high, and everyone is buckling down to do work. Great job, Team 4 ELEMENT!

Although Team 4 students are studying for finals next week, we managed to squeeze in some team bonding! Secret Santa on Wednesday was a huge success as everyone got wonderful, hilarious gifts.

The final pieces for the Drive Base have been machined and everything is off to the electronics department.

The Toy Drive is coming to a close as well. Next week is the last opportunity to get in the final donations to the homeless children at the House of Ruth. Team 4 will be going to see the children and deliver them on the 18th.

Only a few weeks left until kickoff! Enjoy your break everyone! 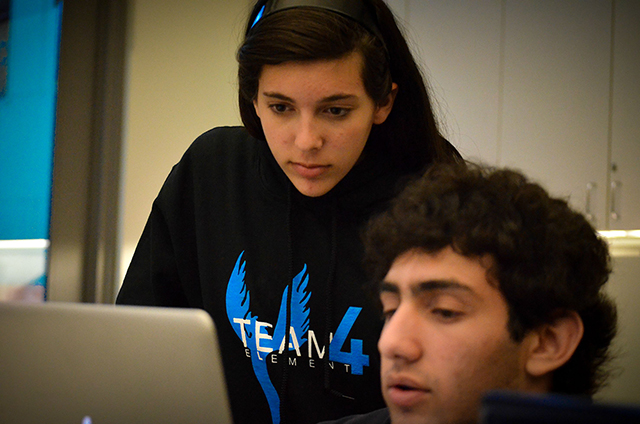 Electronics is preparing to wire the West Coast Drive Base.
— Jordan Rodgers

The media department is adding pictures to our blog and documenting the build process of the West Coast Drive Base.
— Federico Gaytan

Note: Everyone must attend the Kickoff on Saturday. We will be meeting at 6am and stay until 2pm. Kickoff is what the team has been preparing for all year and is when we discover the theme to our next robot at competition.